Inspiring the Next Generation of Innovators.

With the right mentorship our forefathers disrupted mobility and bequeathed us a timeless legacy. In preserving this continuum, we want to pass on this legacy to you and celebrate the lives and inventions of Wilhelm & Karl Maybach.

2011 — Venice, Italy. Vahakn Arslanian and mentor Julian Schnabel at the Venice Biennale with their collaboration, « The Ones You Didn’t Write — The Maybach Car. »

A message from our founder & president :

In 2005, after the new Maybach car had been making waves in certain circles, I reflected on ways to give back. Mentoring was a natural fit given my great-​grandfather Wilhelm Maybach’s rise from the orphanage to iconic designer, an evolution that correlated directly with the support and assistance he received from his mentors.

It turns out that this meaningful message resonates with many people and especially with Maybach enthusiasts. I learned that some followers have had a similar story while others reflect on the privilege and subsequent responsibility that success has brought — in addition to being able to afford fabulous things. Others have shared with me that they wish they had had a mentor in life as it would have made a difference on so many levels.

So, as we scratch the shiny surface of our beautiful things, we find the basic rudiments hidden beneath the veneer of great accomplishment, and with that, the provenance we didn’t know was there. Here then we get to explore both — the rich heritage of the 100+ year Maybach story as well as the paradox that led to its current iconic status.

I invite you to join me on this journey of discovery.

Finally, there is the colored thread of mentoring that runs though the Maybach story with Wilhelm Maybach’s beginnings in the orphanage, Karl Maybach’s dual-​track talent development program that combined theory and practice, and the Maybach Foundation programs that advance mentoring today.

At the Maybach Foundation, we have identified a number of ‘Maybach DNA Markers’ which serve as an expression of the iconic Maybach innovations, groundbreaking achievements in engineering and design, as well as methodologies that made Maybach an innovative powerhouse in the 20th century.

‘Maybach Powered’ is an art-​series developed in collaboration with world-​renowned artist Michael Schwab that encapsulates the Maybach DNA ecosystem and the famous Maybach mantra of “mobility by land, air, and sea”. 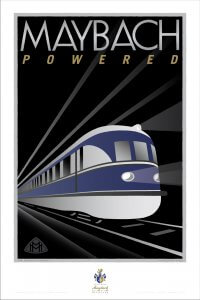 « The Train » by artist Michael Schwab

In 2014, the Maybach Foundation acquired a historic artifact of the Maybach history : the last SVT express railcar 137 856 « Type Cologne » from the 1930s.

The SVT high-​speed railcars are considered to be the world’s first high-​speed trains. With the conversion from traditional steam engines to modern, high-​speed diesel engines, the “flying trains” powered by Maybach engines paved the way for a new era of mobility and travel. Through the refurbishing of the SVT “Cologne“, the Maybach Foundation sets out to breathe new life into a milestone of German engineering.

As a mentor, you are embarking on a journey that will have a long-​lasting and positive impact on another person’s life. Mentoring will change the way you think about your work and your role in helping others become successful both personally and professionally. Mentoring relationships are unique and our goal is to help you learn and apply the skills needed to become an effective mentor.

Under our motto « Your best future is helping someone else find theirs », we have been managing mentoring projects since 2006. In order to share our knowledge and encourage others to get involved in mentoring projects, we have put together the Maybach Foundation Mentoring Compendium, a 90-​page handbook that teaches you the core skills required to become a mentor yourself. 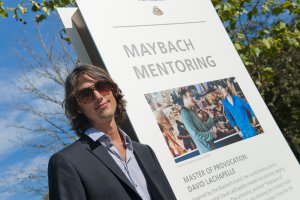 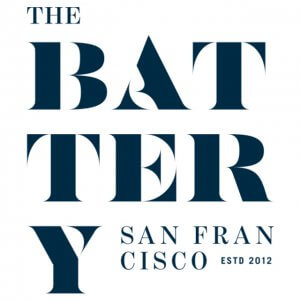 The Maybach Foundation Mentor Talk Series is a discussion forum featuring diverse and relevant thinkers, visionaries and drivers of innovation sharing their personal journeys from early inspiration to where they are today. The focus is on the mentor-​protégé relationship, a theme central to the historic Maybach story and a core aspect of the Maybach Foundation’s work over the past decade.

The Maybach Foundation presents speaker pairs who are representative of the change-​making impact of individual human interaction. In some cases, they have been involved in the Maybach Foundation’s own mentoring projects. Others are paired with a past mentor or mentee who has significantly influenced their personal and professional development.

The Maybach Foundation excellence in mentoring leadership program (2006−2014) provided extraordinarily talented young adults in adversity with the opportunity to connect and mentor with distinguished global leaders in order to make a profound and positive difference in their lives and in the world. 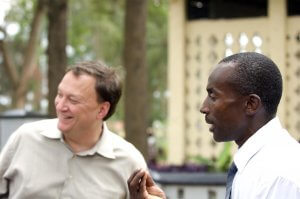