The Maybach DNA Markers are an expression of the iconic Maybach innovations, groundbreaking achievements in engineering and design, as well as methodologies that made Maybach an innovative powerhouse in the 20th century that laid the foundation for travel by land, air, and sea. The achievements of Wilhelm & Karl Maybach have reshaped society, revolutionized mobility, and set the ground for the quality of life we enjoy today.

The Maybach DNA Markers encapsulate a history of firsts. 12 Markers have been identified as specially suited to illustrate and showcase this deep history, making them the focal points of the Maybach Foundation’s heritage work.

Take me to the DNA Markers ! 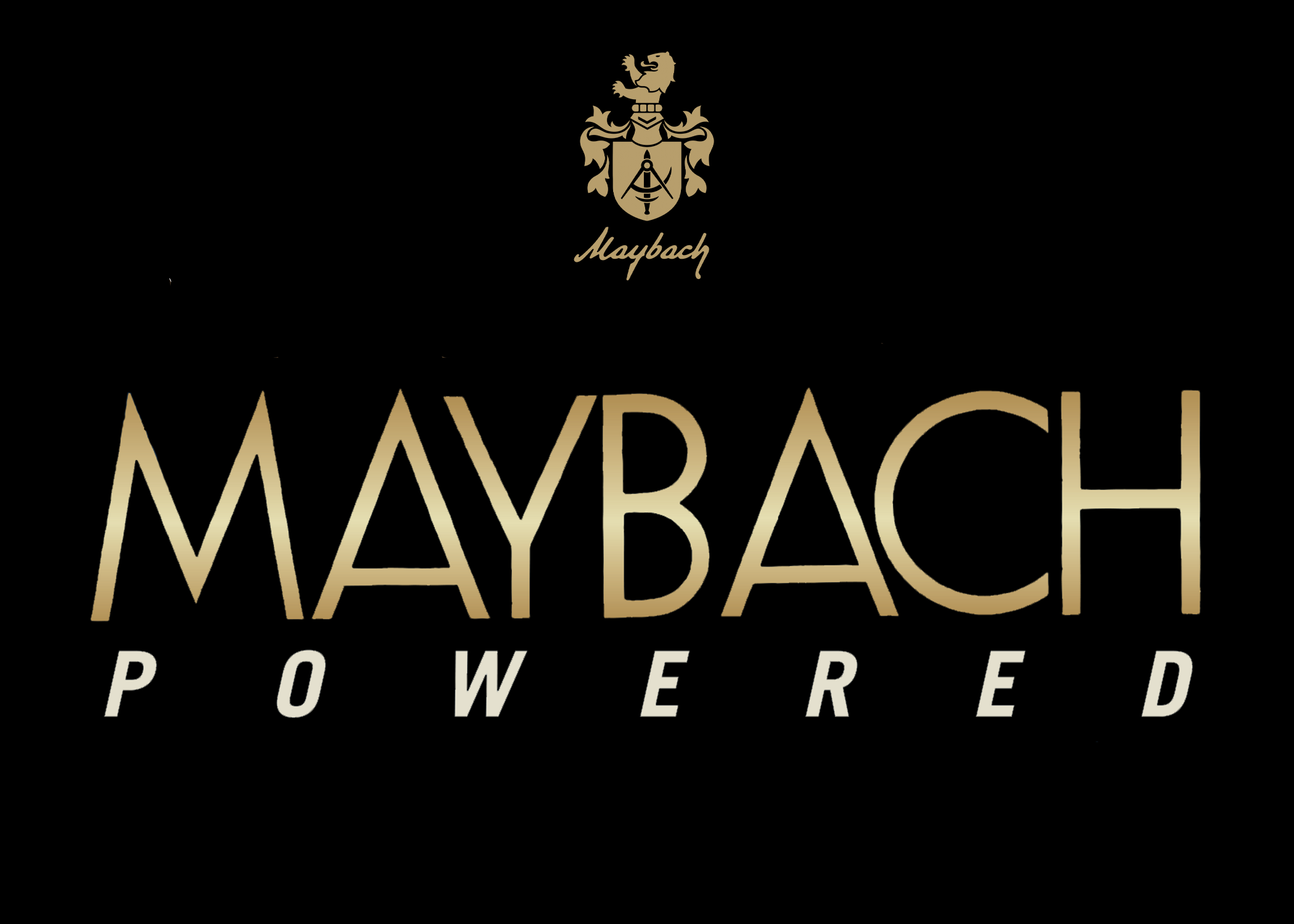 Michael Schwab is a master of his craft who achieved international recognition for his unique, iconic poster-​art style.

Over the course of last year, Michael Schwab developed the first three Maybach art pieces : ‘The Train’, ‘The Zeppelin’, and ‘The Yacht’. All three motifs are part of the ‘Maybach DNA ecosystem’ and perfectly encapsulate the famous Maybach mantra of “mobility by land, air, and sea”.

Take me to the store !

“The Train” showcases an important piece of Maybach engineering history : the SVT Express Trains from the 1930s, which are considered to be the world’s first high-​speed trains. Replacing traditional steam engines with modern Maybach high-​speed diesel engines, the “Flying Trains” paved the way for a new era of mobility and travel.

Of course, Wilhelm and Karl Maybach had their fingers in many more innovations that revolutionized mobility “by land”. Just to give you an idea :

Wilhelm got his start by developing compact fast running combustion engines (1883) which allowed him to effectively power the world’s first-​ever motorcycle : the “Reitwagen” (1885). Just after the death of Gottlieb Daimler, with whom he had cooperated closely the years prior, Wilhelm Maybach then went on to construct the first-​ever Mercedes : the “Mercedes Simplex” (1901). The Simplex and its revolutionary honey-​comb cooler system laid the foundation for a new generation of automobiles.

In the mid-​1920s Karl, who had taken over from his father, shifted his focus towards the construction of fast running engines for trains with the objective of allowing for smoother and faster transportation than the existing solutions. At the time, steam-​powered trains were still the status quo. What Karl managed to achieve can only be described as a disruption of an entire industry : his so-​called SVT trains (“Schnelltriebwagen mit Verbrennungsmotor”) enabled passengers to reach all major German cities within a day by reaching world-​record speeds of 160 km/​h, thereby reshaping society forever. 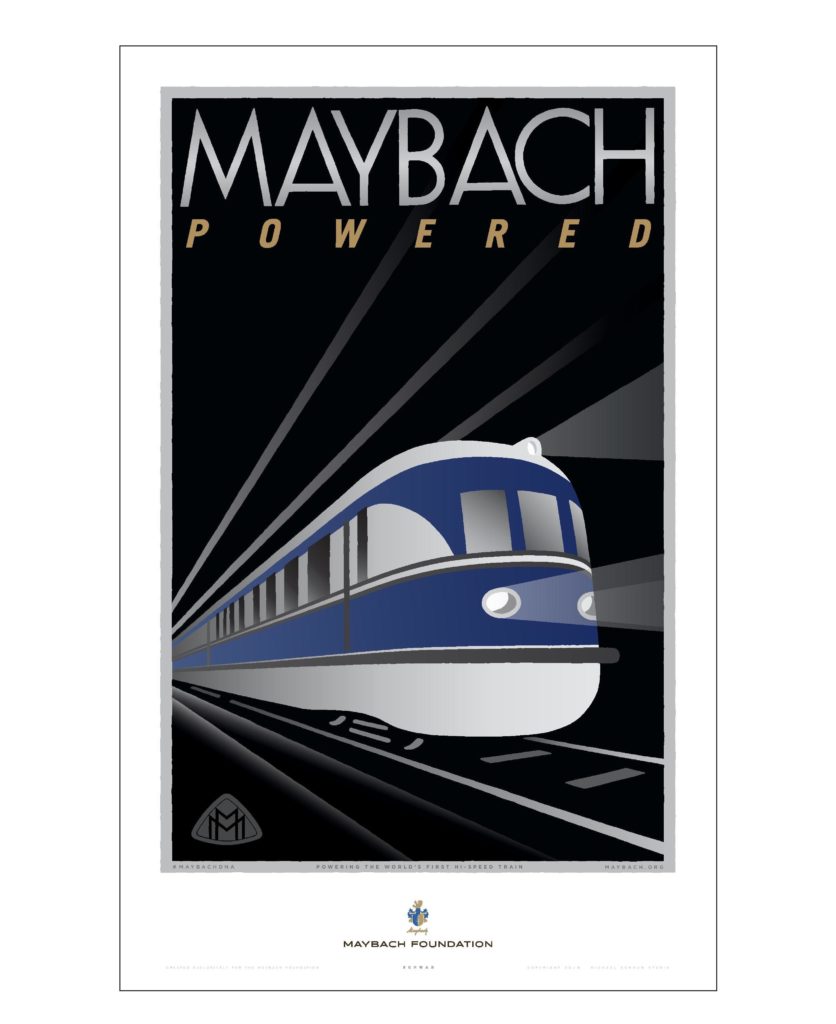 « The Train » by Michael Schwab 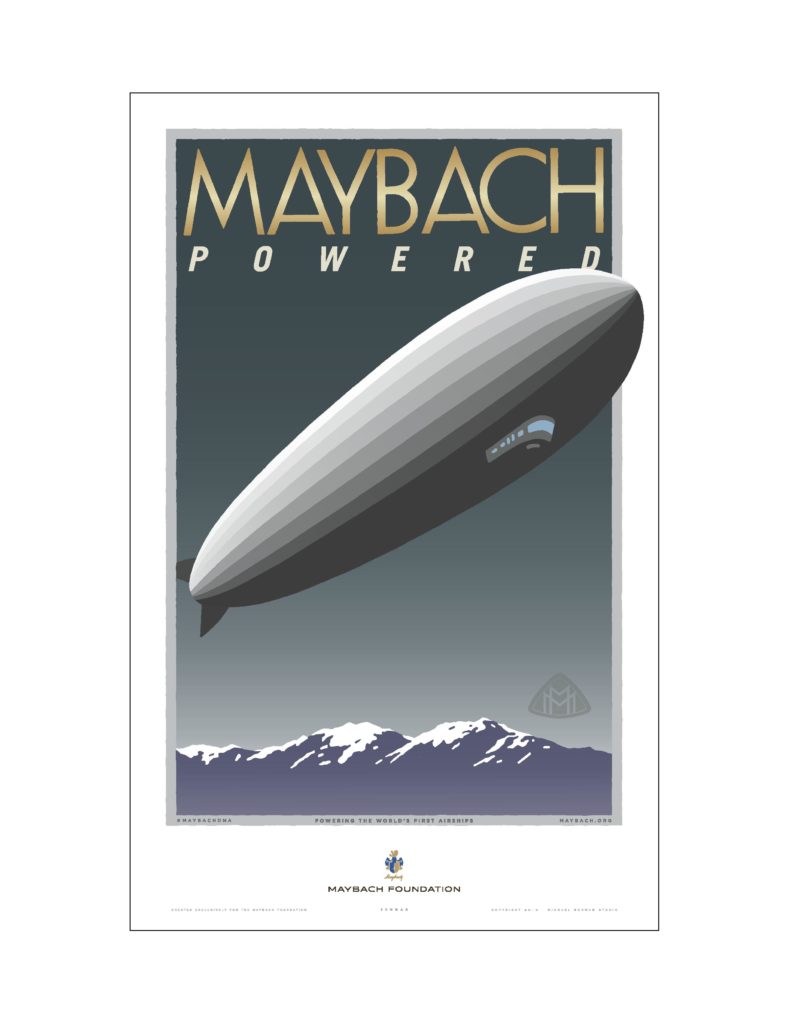 « The Zeppelin » by Michael Schwab

“The Zeppelin” encapsulates the interwovenness of advances in aerial propulsion and Maybach engineering heritage.

This chapter of Maybach history starts when one of Wilhelm’s early constructions is used to propel the “LZ 1”, the first-​ever airship prototype developed by Count Zeppelin (1899). Shortly after, however, Wilhelm Maybach decides to leave the Daimler company leading to him being banned from working on the project. His son Karl, who had already profited from a very good education and the mentoring received from his father, on the other hand, worked on the development of a car engine for the French Count La Valette. This engine, which was meant to be powerful, smooth-​running, and reliable was the perfect product to offer to Count Zeppelin who at the time was searching desperately for a more reliable propulsion system for his airships.

In 1909, the cooperation between Maybach and Zeppelin, which proved to be highly successful over the years to come, officially kicked off. Over the course of the years, Maybach engines were frequently used in airships and airplanes until the production of aerial propulsion solutions comes to a halt at the end of WWI.

Contrary to what one might assume, these restrictions do not lead to the end of this chapter in Maybach engineering. Instead, they lay the base for the golden era of airships, which is launched by the LZ 127 ‘Graf Zeppelin’ in 1928. At this point, the association with the Zeppelin airships has become an integral part of the Maybach Motorenbau (« Maybach Engine Company ») brand image.

The interconnectivity of Maybach and Zeppelin is also reflected in other areas, for example, the Maybach high-​end car model featuring a 12-​cylinder engine, later dubbed the “Maybach Zeppelin”, as well as the Maybach DS7 & DS8 which would also feature “Zeppelin” as part of their classification.

“The Yacht” highlights the third element in which Maybach Engineering paved the way for a new era of mobility : water.

The three corners of the original Maybach Motorenbau ‘double‑M’ logo, are said to represent the three elements in which Maybach engines came to be used. While the impact on mobility “by land” and “by air” is more obvious, there are also stories to be told about Maybach engines powering boats & yachts.

Wilhelm Maybach and Gottlieb Daimler were aware of the importance of flexibility when developing new products. To no one’s surprise, in 1890 they were also the first to every motorize a boat. Later on, Karl Maybach followed in his father’s footsteps by strategically thinking about the different contexts his newly developed engines could & should be used in. For example, the first generation of car engines in the 1920s, the ‘W Series’, was also offered in a variant that was marinized, which meant that its components were made to be fit for usage in water.

This idea later manifested itself when Karl started implementing airship engines into yachts. One of the most interesting examples is the OHEKA II (1927), which was built by Luerssen shipyards for Otto Hermann Kahn, one of the wealthiest men of his time. In order to commute to Manhattan in a faster and smoother manner, he had three airship engines installed that combined for over 1200 horsepower, making it the most powerful ship in its class.

Shortly after WWII, Maybach engines once again disrupted an industry : the ‘MD’ engines became the gold standard on the market as the superior fast-​running engines for boats, ferries, yachts, and the like. This legacy of technical excellence lives on to this day and can still be found in the motorization of the world’s largest and most powerful yachts. 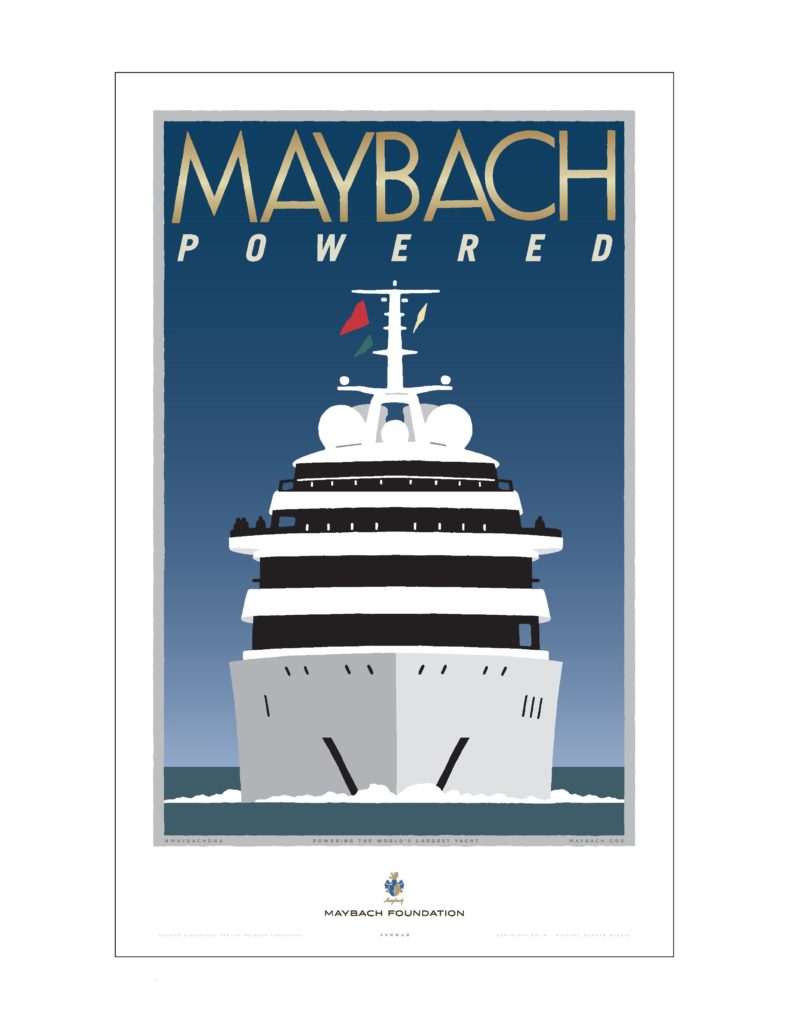 « The Yacht » by Michael Schwab 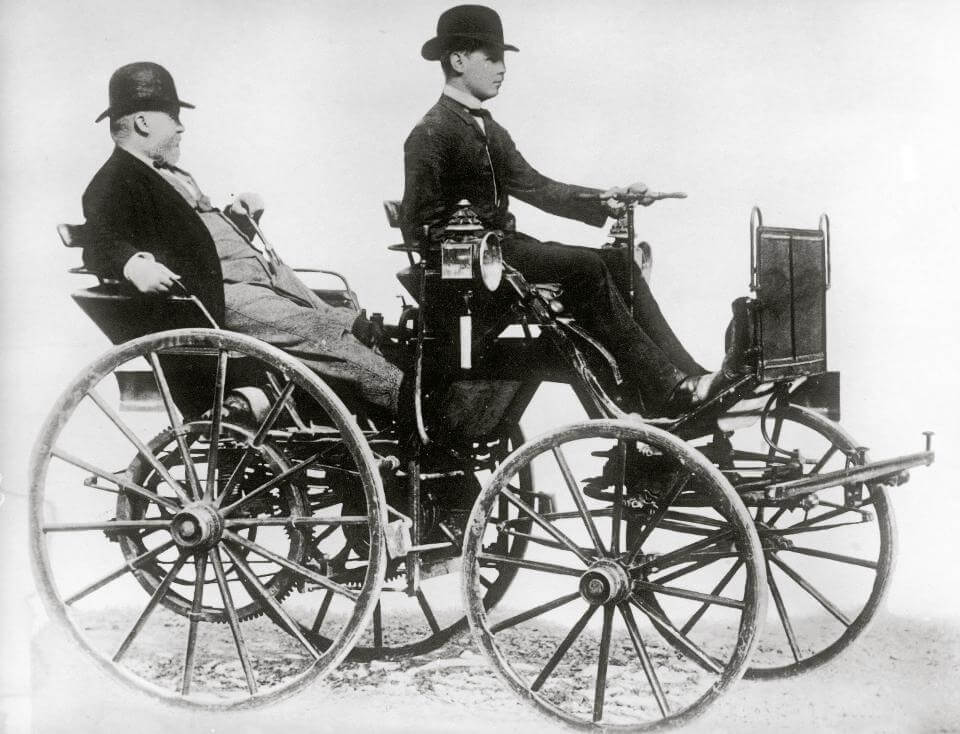 We have identified 12 Maybach DNA Markers that represent the iconic Maybach innovations, groundbreaking achievements in engineering and design, as well as methodologies that made Maybach an innovative powerhouse in the 20th century.

Over the course of the coming weeks and months, we will continue to develop the remaining nine markers in a similar manner as the Yacht, Zeppelin, and Train pictured above. We’re looking forward to sharing these important chapters of Maybach history and heritage with you in the near future.

Our online store follows a dual intent approach : While offering unique, iconic Maybach Foundation branded products for the everyday life of our supporters and fans, a portion of each sale directly supports the Maybach Foundation and its programs.